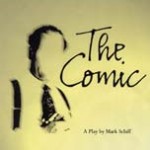 The Comic, a new play by Mark Schiff and directed by Mark Herrier, is a poignant and hilariously realistic look at the life of a stand-up on the road. Larry Miller, last year’s USCAF winner for Best Actor in a Film, stars as comedian Sydney J. Katz. After 23 years on the road, he finds himself out of work and stuck in a Tacoma hotel room with a stranger from room service named Mike, played by Henri Lubatti. With no gig in sight, Sid and Mike battle their demons, causing their lives to be changed forever. This fascinating look into the world of The Comic was first performed at arcade, a workspace for theatre and media arts in Los Angeles, and created a great deal of excitement during its initial run. Produced by Alexis Genya and arcade, The Comic takes you inside the microphone.

3 Responses To  “The Comic”

Leave A Reply To John Gaspard